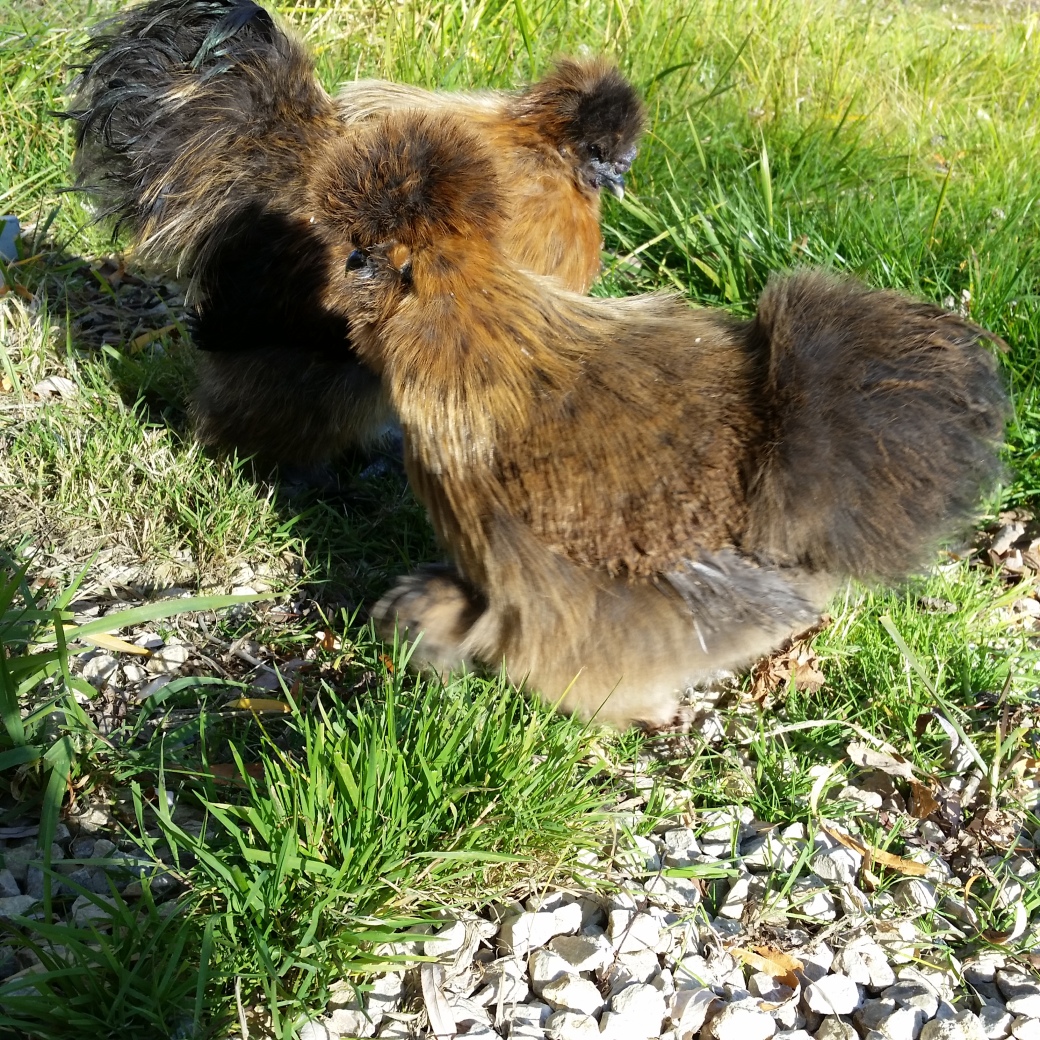 The partridge color and pen is new to VJP Poultry this year. Many people ask whether the partridge is a different bird than the silkie. No, partridge is another color variety like a white or a black.  It is still the same fluffy silkie breed.

Partridges start out as chipmunk striped chicks. The background color can be light or dark.  The stripes are either brown or black. The stripes occur on the back and on the face of the chick.  These stripes are deceiving because the partridge chick will not grow up to show these same markings as an adult.

Sometimes the partridge chicks will not hatch out with chipmunk stripes at all. You could get a solid buff or black color even with both parents being Partridge.

The adult male and female can look very different from each other.  Males tend to be a brighter color and the females a duller color.  The standard calls for a red head on both the male and female. The male should have a dark chest and a dark tail.  Red can overlay on the heck (hackles ) and back (saddle).  The females are described as a reddish bay color. They should have a dark undercoat with a light buff or red on top.  Chestnut color with penciling.

In order to hatch out the correct color chicks for showing partridges you need two different breeding pens.  Darker colored roosters will be needed to hatch out correct looking males.  Roosters that are redder and have less black are better for hatching out correct females.  This is also called a double mating system where one pen is used for breeding males and another pen is used for breeding females.

Occasionally one of your color pens which are not partridge will produce a partridge chick.  For example your all black pen will suddenly hatch out chipmunk striped hatchlings.  If you know that your blacks or your whites occasionally produce partridge you may want to use these colors as out crosses for your partridge flock.  Experiment and watch what they produce. If it improves the line, keep it in.  If it doesn’t then remove those birds.

You may also hear talk of blue partridges.  A blue partridge has a blue background instead of black.  They hatch out with chipmunk stripes but instead of a black chest and tail, it is dilute or blue.

Partridge can be a confusing variety especially to show.  There is one set of standards for the males and another for the females.  This is the only variety that is like that in the silkie breed.  It is definitely a challenge to show it with the correct coloring and to breed it.  They are, however, beautiful birds and are a wonderful, colorful addition to your backyard flock.

One thought on “Understanding Partridge Silkies at VJP Poultry”